The three biggest financial hype stories of 2021 are:

ARKK led the innovation / disruptor mania from the bottom in March 2020 until it peaked in February 2021. As you can see, ethereum followed ARKK with a 3- to 6-month lag throughout the entire rally and peaked in May. Contrary to ARKK, ETH eked out a new all-time high, but has now failed to hold it and looks set to follow ARKK’s lead. The final crypto peak of this cycle looks to coincide with the touch of the meme level (69k) and the renaming of the Staples Center. 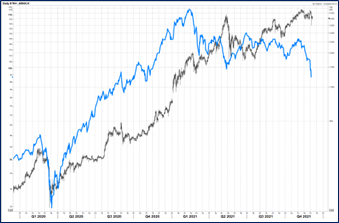 Here’s a quick recap of the bearish thesis:

·        ARKK was the most-hyped expression of the WFH / disruptor hype cycle and it has peaked.

·        First week of the month is usually very bullish crypto due to inflows and crypto has gone down. 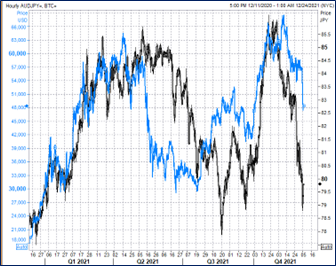 You can see in the chart on the last page that each bull run is less impressive than the one before. As market cap rises, it becomes impossible for the next wave to outperform the last. This is why the Plan B model residual keeps getting bigger. The halvings are mathematically less important (lower overall impact) and the law of large numbers kicks in. It’s easier to grow from 3 billion to 3 trillion than it is to grow from 3 trillion to 3 quadrillion. Obviously.

One of the big reasons Paul Tudor Jones and many others were screaming from the rooftops about bitcoin in mid-2020 was because the US just embarked on the greatest monetary policy experiment in modern history. That was the start of a massive bullish cyclical environment for crypto. Now, the experiment is either over, or its on a prolonged pause. The dollar debasement story is dead for now as USD moons, the Fed accelerates taper, and global central banks slow printing.

I have no doubt that the next round of money printing will be more ludicrous than the last and that will probably take crypto to new all-time highs at some point in 2023 or whatever… But for now, one of the biggest inputs into the bull crypto thesis is on hold. And all those new TradFi types that have just bet their careers on crypto will not be able to ignore the turn in the Fed cycle as easily as non-macro crypto maxis.

The most understandable way for me to show the Fed cycle and its impact on crypto is to show EM currency performance vs. BTC. When the Fed turns hawkish, the USD rallies fastest and most aggressively against emerging markets. Here is the YoY performance of bitcoin vs. EM currencies:

Left y-axis is bitcoin, I capped it at 1000% so the chart remains legible. Right y-axis is JP Morgan EM FX index

Obviously, I could be wrong. The nu variant could lead to another massive round of money printing, for example. More likely, though, $69k BTC was a major maximum for crypto prices and some sort of winter is around the corner. I doubt it will be as bad as the last winter, but you never know.

Thanks for reading. Click here to sign up for crypto updates (free) or my macro daily ($490/year) or both.