Hello, thanks for signing up for the crypto musings of a BTC-agnostic GenX TradFi global macro loving Canadian.

The vigorous consensus when BITO launched was that it is a bad, expensive product with negative rolldown, a management fee (95bps!), and certain tracking error. The message was… If you want BTC exposure, buy BTC. BITO is a derivative of a derivative and feels a bit like a boomer with laser eyes. If you want your BTC but need it to look and trade like an equity, there are still plenty of better alternatives than BITO.

Bitcoin and bitcoin proxy performance since the launch of BITO

I’m using closing prices for October 19, 2021. That is the first day BITO traded. No carry in these numbers.

CN means it trades in Canada. Gold is the analog, negative-yielding version of bitcoin

A cool idea that would be very difficult to risk manage

If BTC skew is for calls, and spot/vol BTC correlation is positive. And: AUDJPY and NASDAQ skew is for puts, and spot/vol correlation is negative. In other words, BTC calls trade at a premium while equity and AUDJPY puts trade at a premium. And they’re all risky assets… That is, AUDJPY, NASDAQ, and BTC are POSITIVELY correlated[1]. Isn’t there a really nice portfolio where you sell AUDJPY or QQQ downside and sell BTC topside? And you can diversify across a basket of crypto, cross/JPY and long duration assets if you want to smooth out idiosyncratic risk.

Obviously, you run into some major mark-to-market issues if vol rips, but if you structure it the right way this could produce a juicy yield. I acknowledge this is hard to risk manage and degenerate if you lever it up. Two main embedded views in the strat are: 1) crypto remains a risky asset with positive corr to AUDJPY and QQQ. 2) Crypto vol under massive structural pressure for years as institutions move in. Retail likes to buy vol and Wall Street likes to sell it.

If your fund is long-only crypto, you can do this strategy while holding a disproportionately large spot crypto position against the calls you are short. No action required here, just some slightly loony stuff to think about.

I will shut up about GameFi after this, I promise

Fun fact: Fortnite (2017), Minecraft (2011), and Roblox (2006) are all metaverse games. So was Second Life (2003) and Flight Simulator (1982). They are pre-built metaverses with super fun gameplay. The current model of building a giant empty metaverse and inviting people to buy pieces of it seems…Less fun?

The blockchain model so far is mostly get the users first via token and promos, then build the game. This runs in reverse to the traditional model which is: build a good game and attract users. Crypto gaming is still in the embryonic stage so it’s understandable that the economics of this reverse video game model would be challenging or confusing to newcomers like me. Please send me links to any fun blockchain-based games you have been playing. I want to try them but haven’t found one yet. Star Atlas could be a candidate in the distant future but… It’s easy to release a token. It’s fairly easy to create a cool trailer and minigame. It is very hard to make an actual fun video game.

If you have ten minutes, take a look at this video of the new Star Atlas “mini-game” which was launched with the fanfare below. The comments below the video capture the main point. If you don’t have time to watch the video, here’s the takeaway: The mini-game they announced is not a mini-game. It’s not even an idle game. There is no gameplay. It’s not a game. You click on a button to stake your ship. That’s it. 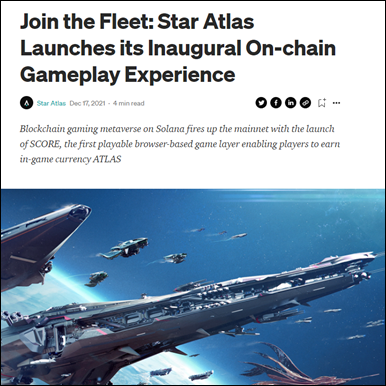 I was picturing cool space ships flying around doing little missions or something. Nope. If you want a funny, skeptical take on the whole thing, this Star Atlas review-of-a-review video is worth a chuckle (contains bad words).

The ATLAS concept is super cool. It’s straight out of Ready Player One (the book, not the movie). But a key concept in video game development is scope management. Grand visions are fun but extremely difficult to execute. Many large projects get bogged down or abandoned due to scope issues.

A friend of mine runs a medium-sized video game company, and he always says: Ideas are 5%. Execution is 95%. That’s a cliché in all business (and in creative projects like books and music, too) but it’s especially true in video games.

There are some fully-formed, professionally-built games appearing on GALA and ENJIN, as opposed to the ROBLOXy mini-games in Sandbox and Decentraland. Even if the GALA games are mostly clones of existing games (Spider Tanks = League of Legends, Town Star = Farmville), at least they are actually games. The execution risk on GALA and ENJIN seems lower to my non-expert eye than the execution risk of something gigantic like ATLAS. It’s easier to keep iterating on an open platform until one of the games hits. If ATLAS isn’t fun, it’s game over.

SAND target still $1.68. AXS $33.00. ATLAS is probably a short too but it’s already 75% off the high so there’s no point. In fact, the irony is that the longer they slow-play the pre-alpha alpha versions of the game, the longer people will be forced to keep the faith. If the real game ever comes out, then the rubber hits the road.

Web3 is a Long Fight Worth Fighting: Michael J. Casey

Finally, Microsoft bought Activision today. End of an era. Have a punchy rest of the week. 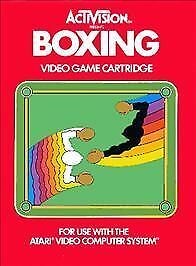 The big driver of crypto these days is global macro.

Global macro is my real job. This is just for fun.