A Taxing Month Ahead 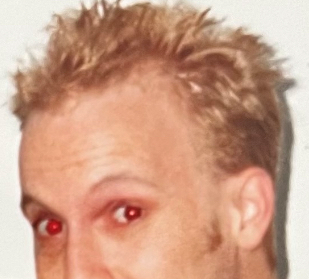 Listen to this as a podcast on Spotify here

Listen to this as a podcast on Apple here

Hello crypto bros and sisters; it’s been a while. I will only publish MTC when I have a strong view, or when I feel I have something additive.

Today: I have new thoughts, but first let me give some quick context: My last update was February 24th when I turned tactically bullish BTC around $38,000. Now, I think the next month or so will be tough times for crypto bulls, so I’m sending a new update.

Reason one: The taxman cometh

I was pretty dumb in the late 1990s. At 27 years old, I was living proof that “smart” people do dumb stuff. All I cared about was having fun and nothing much mattered to me besides the bull market in NASDAQ stocks and the bull market in all things Brent Donnelly. I was making good money, having all sorts of fun and I had no responsibilities or cares.

Anyway, in Q1 2000, I was trading my own money and feeling invincible. The approximate peak of my invincibility coincided with a phone call from a reporter at the Globe and Mail (Canada’s National Newspaper), which led to a feature article / trader profile that appeared on the front page of the April 8, 2000, Globe and Mail Business Section along with a full-color picture of my 27-year-old self.

Note that this is the exact type of hubris-filled trader profile that comes out when stocks are on the highs and the profiled trader’s equity is about to crash. Kinda like, erm… This one. Little did I know at the time, the NASDAQ had already peaked a few weeks before the article about me came out. My equity peaked a few months later.

Here’s the article and here’s what I looked like in those days. 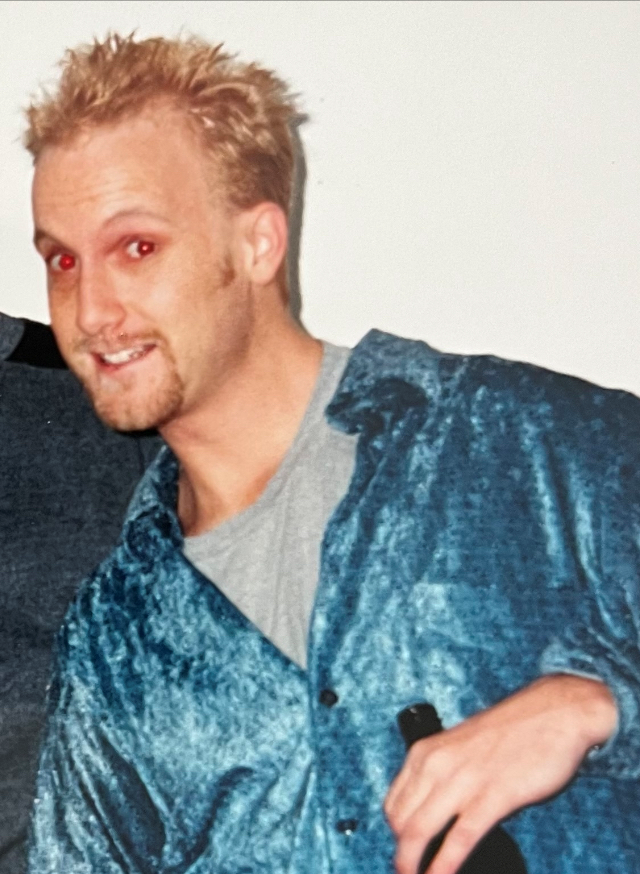 I was excited about the Globe and Mail article when it came out (my ego was particularly excited). The feature came out in the Saturday paper, and while things didn’t really go viral in those days, it went semi-viral amongst my friends and acquaintances and I got a few high-five style phone calls including one from a girl I had an unrequited crush on in university. (Hi Suzie.)

But Monday, when I returned to the trading office, it was all cold water from the adults.

“Brent, you should not be doing interviews like that,” warned one of the managers of the trading shop, “It just puts a target on your back. You don’t want this kind of attention. You’re going to get audited for sure now, so be ready.”

Another elder statesman (who was probably 33 or so) just shook his head as he stared at me and said: “So dumb… The tax, man. The tax…”

Now, a normal, mature adult would probably react to those comments with some sort of concern about getting audited. Like: “Oh, shoot, I didn’t think of the audit angle here.” But…

I was not a mature adult. My thought process instead was: “Oh, crap. Taxes! I forgot about those.”

I am not kidding. I had turned my $25,000 opening account balance into around $275,000 or so by that point, and I had not budgeted for, or even considered that I would need to pay taxes. My only focus had been on making as much money as possible. Crazy thing was, I was not alone. Few of us noobs had considered the tax side.

The rest of that afternoon, we tried to figure out what to do. Should we just keep trading and worry about taxes later? Maybe we can just pay them all in 2003, or something? Could we maybe “forget” to file taxes? Would that be bad??

Obviously, the only eventual answer was: Liquidate a bunch of your trading account and pay the tax. My account withdrawals had no market impact because my strategy mostly involved day trading headlines and trading lead/lag single name vs. spooz momentum, but there were plenty of “Swing Traders” that traded exclusively from the long side, cycling between, for example, the hot B2B names like Backweb and Marimba (BWEB and MRBA), the fiber optic darlings (JDSU), and the incubators (CMGI). In case you were not around in those days… CMGI was the SoftBank of 2000. It went to zero.

And by the way, I did get audited.

As is the case now, retail trading was huge in 1999/2000. People with “real jobs” spent more and more time churning their e*trade accounts and anyone with half a brain was making plans to quit their job and trade full time because: free money!

Here is the relative prevalence of the term “day trading” in books published from 1990 to 2019.

So all these people were making crazy money and taking zero steps to prepare for tax season. Here is how the NASDAQ performed from February 1 to May 15 in 1999 and 2000 (line shows the average of the two years): 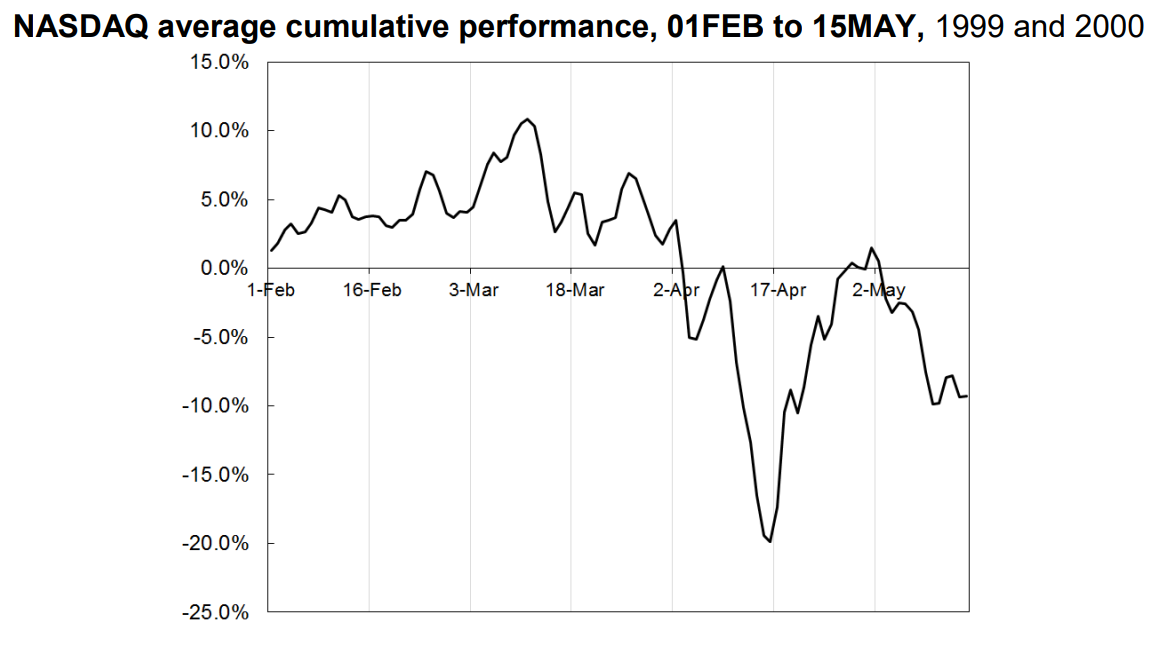 I think punters selling to raise money to pay taxes on short-term trading income was mostly to blame for the aggressive selling that swamped the market in the first two weeks of April 1999 and 2000. The low in 2000 was the Friday before Tax Day, April 15. And in both 1999 and 2000, the week of April 15 saw epic selling. There was no significant fundamental news. The NASDAQ dropped more than 25% that week in 2000 and journalists struggled to explain the move. Here’s a quote from an April 14, 2000 CNN story:

…analysts say little fresh fundamental news was behind the week’s losses. Instead, months of greed that fueled one of the greatest bull markets in history turned to fear on changing sentiment that the highest-flying technology stocks rose too far, too fast.

I doubt it is a coincidence that the heavy selling came the week of Tax Day, but the sample size is tiny and there was a lot of other stuff going on at the time so who knows.

Last year, I predicted that crypto would get pummelled on this tax payment funding trade as the setup looked identical to my experience in the year 2000. Here is what happened: 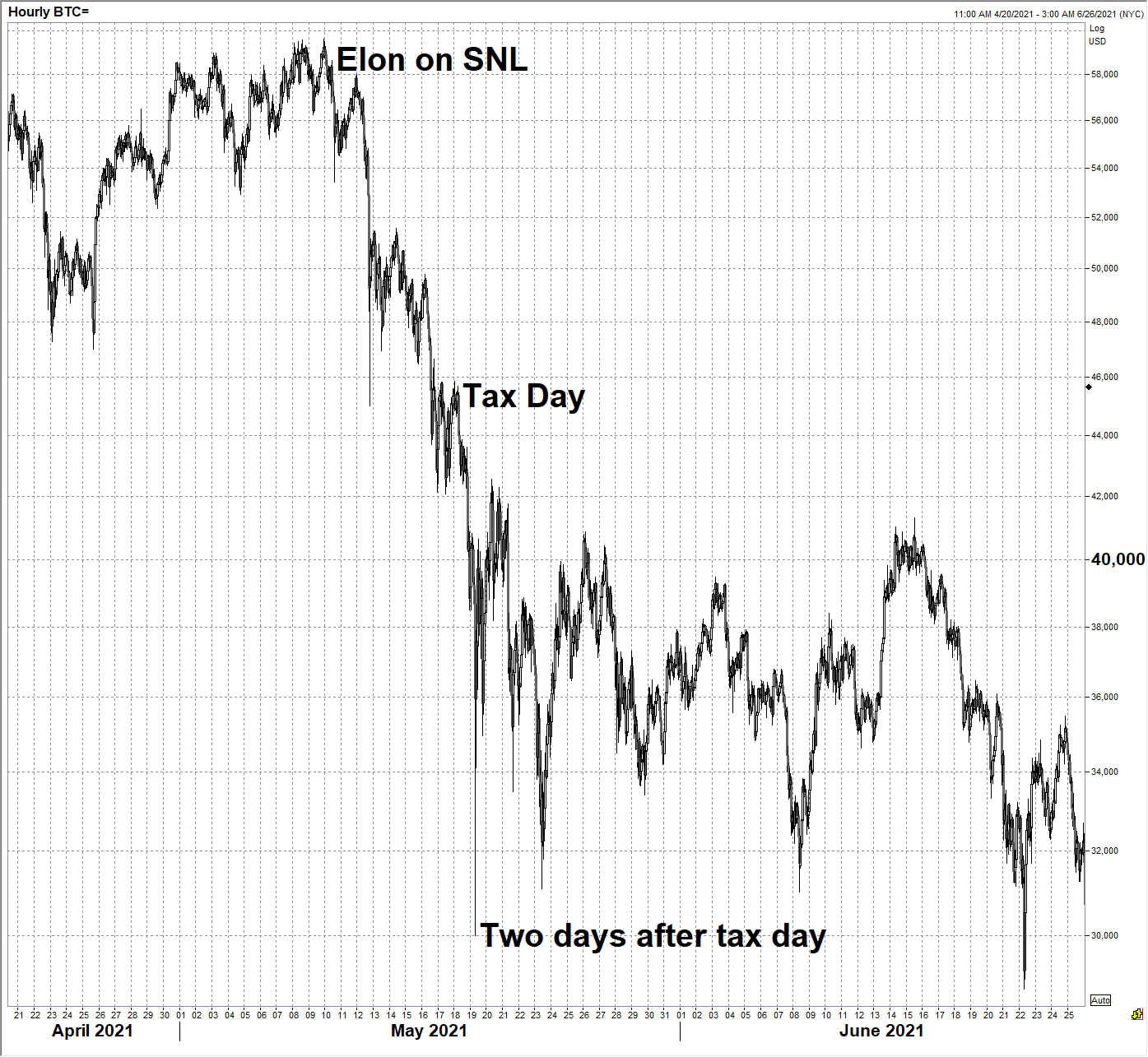 It’s impossible to completely blame or isolate the tax effect, but again, crypto dumped into and around Tax day. Probably not a coincidence but we will never know for sure. This year, tax day is April 18.

Bitcoin and the NASDAQ have held up very well in the face of significantly higher US interest rates. The problem at some point is that the Fed generally will keep hiking until something breaks. Furthermore, not only are US rates going up, but the Fed is about to start reducing the size of its balance sheet via quantitative tightening (QT). This is potential kryptonite for risky assets when it starts.

At this point, the looming QT story is not new… We have been talking about it since January and it’s part of the reason most risky assets including bitcoin are still down on the year. But as the May 4th FOMC decision nears, the anxiety over whether or not Jay Powell is about to go all Paul Volcker on the market is going to build.

Powell’s speech at NABE was titled “Restoring Price Stability.” If you are not a big macro person, this is probably the one central banker speech you might find worth reading. The Fed is not going to restore stability with a bunch of baby steps.

The market is pricing a new regime of 50bp Fed hikes and generally into each Fed meeting, the risk is the Fed over-delivers as they remain so insanely behind the curve. In the runup to events like this, the market likes to reduce risk, not add. That means the risk is lower BTC and higher USD as the market worries about a tighter Fed and takes some crypto chips off the table.

The leads and lags in the following chart might make people angry with me but it is my strong belief that whatever your structural view on BTC (mine is bullish), you still need to respect the cyclical story unless you have an unlimited time horizon and no stop loss. That is: HODLers can ignore tactical and cyclical considerations but traders cannot.

The chart shows 1-year yields in the USA (inverted) along with bitcoin. As a general rule, since BTC is very much a “Fed is crazy!” “They be printing too much money!” trade… It makes sense that when the Fed cuts, BTC goes up and when they hike, it goes down. This doesn’t mean the fit is perfect, it’s a broad statement that is generally true and there are leads and lags. 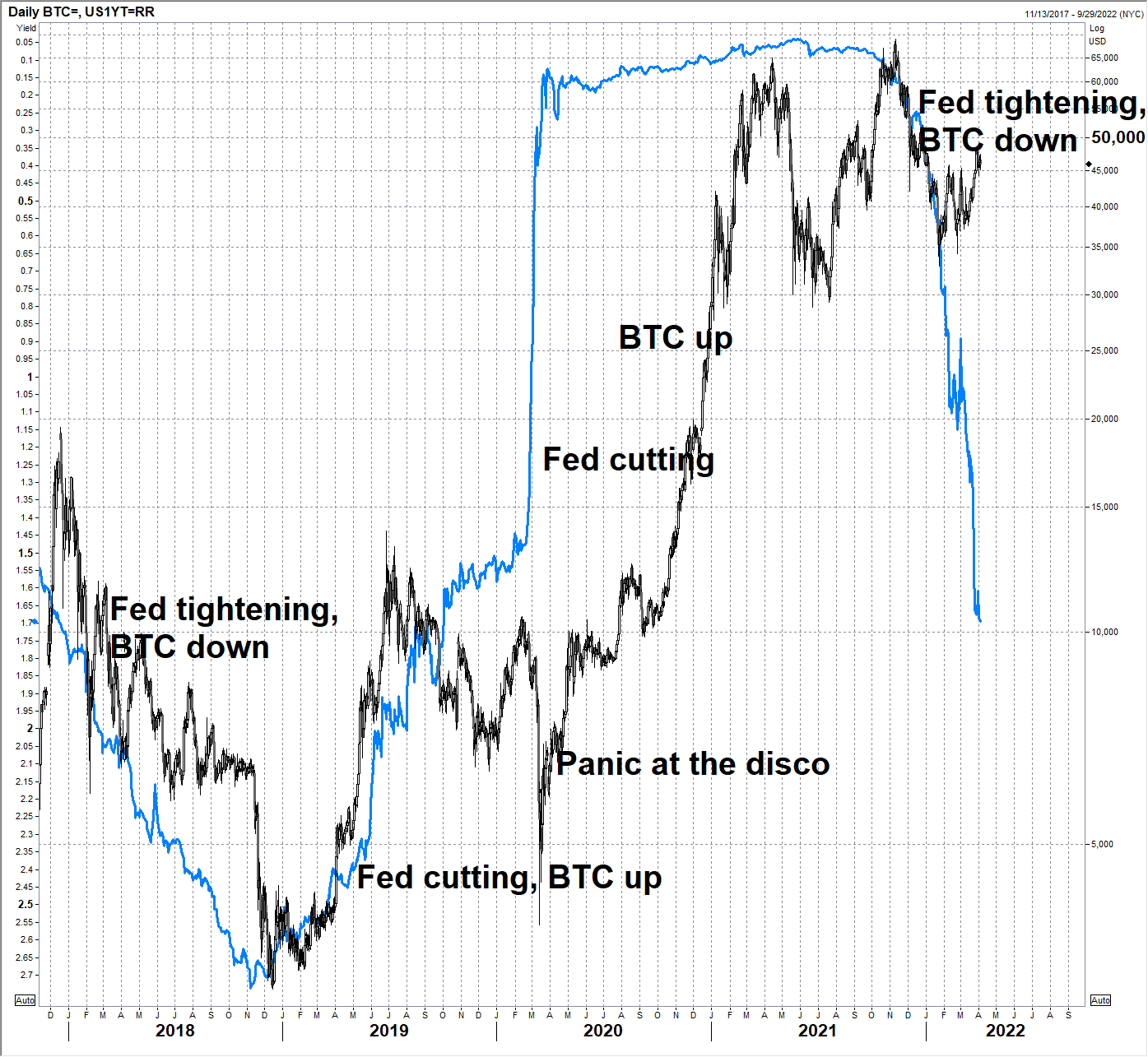 If you map the USD against BTC, you get a similar story and you can see that BTC lagged massively when the USD started to sell off in 2020. Maybe it’s lagging again. The chart is below. The blue line is the USD chart inverted so it’s easier to see how it tends to move in roughly similar cycles to the dollar.

DXY (inverted, blue line) vs. BTC: Daily, back to pre-COVID 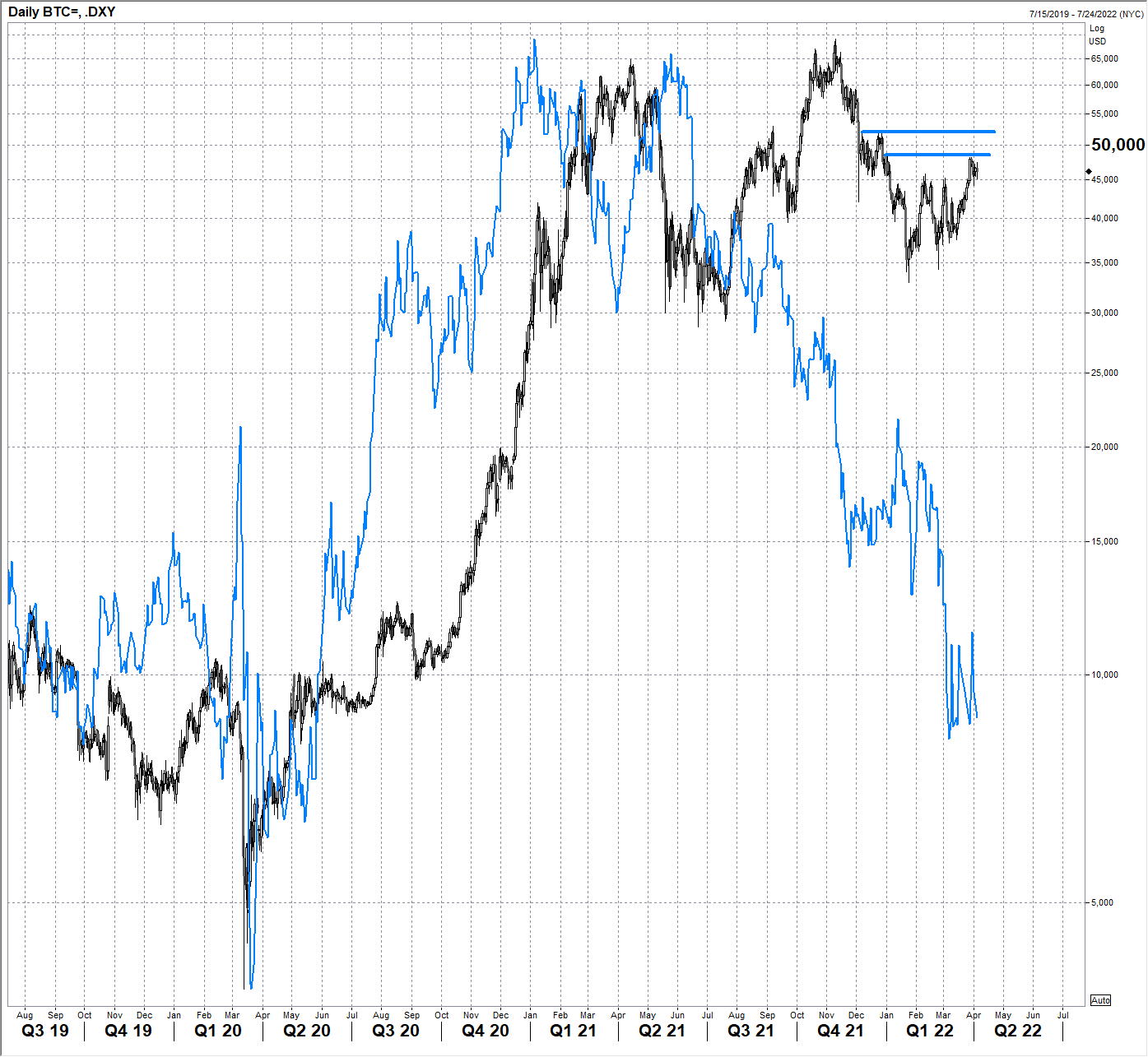 This relationship is not an iron-clad law of physics, but it is logical given BTC is priced in USD and a big part of the BTC thesis was once “dollar debasement”. I never use these overlays as the be-all-end-all but they can offer useful clues when you’re trying to figure out the distribution of probabilities for an asset.

While maxis and haters tend to view bitcoin in a deterministic way (“it’s undervalued, even at $1 million” or “it’s worth zero because it’s a Ponzi scheme”) I am more agnostic and tend to think of things in probabilistic, not deterministic ways. Right now, I think the balance of probabilities suggests BTC lower in the next four weeks as the Fed story moves to the market narrative front burner and upward pressure on the USD weighs on all flavors of digital coinage.

You should sign up for am/FX. That’s my daily global macro note, which I have been writing since 2004. In there, I explain all my live trade ideas (lotta FX, but also other asset classes) and give you all the global macro in an easily-digestible two or three-page note.

If you like what you are reading in 50in50 so far, you will love am/FX. It also includes a spicy nonsequitur each day to stimulate your brain jelly. Thanks.

Bitcoin opened the year at 47500 and it’s now trading at 46000 after a very slow and steady grind off the 33000 low. It took three weeks to drop 15k and four times as long (three months) to recover the same 15k. This says to me that buyers are not all that motivated as the moves lower have been impulsive (fast) while the moves higher have been grinding (slow).

The theory is generally that impulsive moves happen in the direction of the trend and grinding reversals of those moves are corrective. The big resistance is at the 2021 opening highs (48500), the late March highs (48500) and the December 2021 double top (52000). 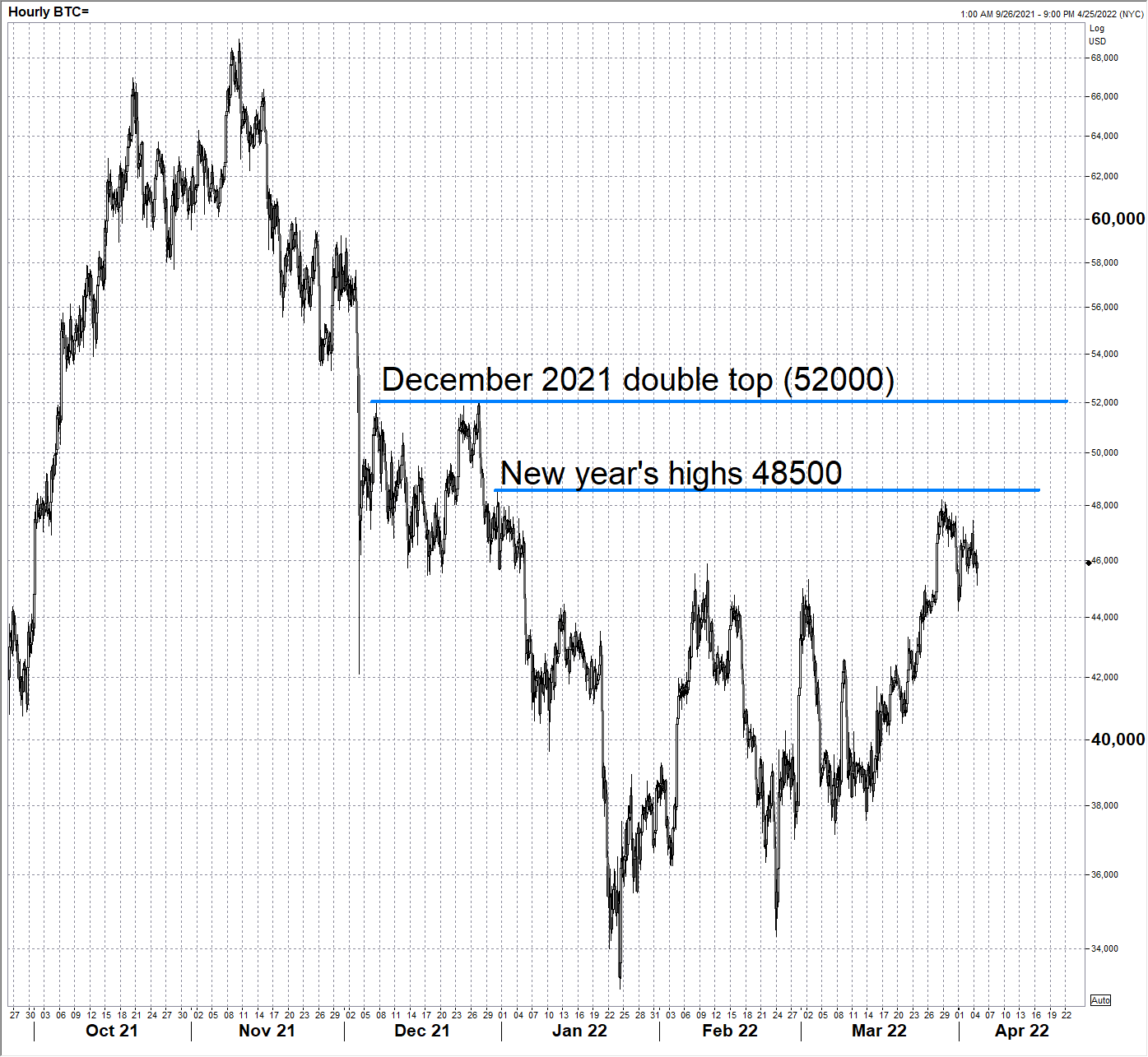 With BTC grinding in a corrective move back to the year’s highs just as we enter a perilous seasonal window, risk/reward on long crypto looks bad. US tax day, April 17, is the first potential flashpoint for crypto and the second risk event is the Fed meeting on May 4.