In bitcoin, like in every other market, the market loves to leave orders on the round numbers. This is because human beings are not altogether rational. We exhibit all sorts of predictable human bias, including Round Number Bias[1].

When you fill your car with gas, do you sometimes have the urge to round it off to the nearest dollar, even though you are paying with a credit card? Do you get a tiny thrill watching a car’s odometer roll over from 99,999 to 100,000? For many amateur marathon runners, a finishing time of 3:59:58 is a great success while 4:00:02 is a disappointment. People will push themselves to the absolute physical brink to break the four-hour barrier. And it works! See here: 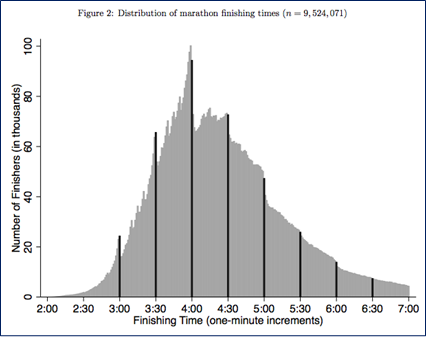 Human beings tend to pay attention to round numbers and treat them as special or more important than other numbers. This is good to know for traders because if you are rational, you can position yourself ahead of these round numbers knowing the probability of a fill is higher for a limit order at (for example) 68,998 than at 69,001.

There is also a novel (and also irrational) phenomenon in bitcoin and meme stocks where traders find particular numbers funny, and place orders at those levels in order to screenshot and flex or just have a good laugh with the peeps in the Discord chat. The numbers 69 and 420 have become standalone memes at this point and so the approach of bitcoin to the $69k level and the $69,420 level were hotly anticipated. Bitcoin obviously has many serious narratives behind it, but it still has one foot firmly placed in the Nonsensical Timeline.

Here is the actual real-life, not The Onion headline from FTX’s most recent funding round: 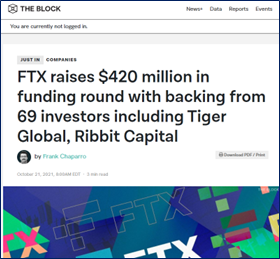 This headline adds to the increasing weight of circumstantial evidence that pretty much confirms now that we live in a simulation created by a futuristic civilization of twisted, genius, dark comedy-loving 11-year-olds.

Knowing that round numbers always matter in markets and that 69 and 420 have particular resonance in crypto, I decided to analyze transaction level data from Gemini to see what pops out.

First, I built a histogram using the last two digits of every high and low in the bitcoin hourly data back to 2018. The excel sheet has 33,840 rows. The output looks like this: 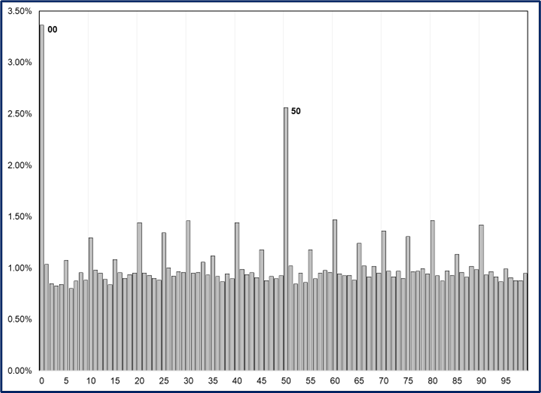 The chart for bitcoin is similar in shape to what you see in other markets. For example: 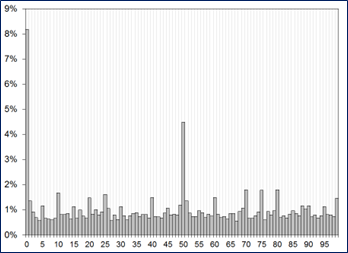 Excerpted from “Alpha Trader”, used with permission of the author

Even heavily institutional markets like FX show this sort of predictable, nonrandom, lumpy distribution, though the effect is much smaller in currencies. Now, looking at the last three digits of the bitcoin hourly highs and lows, we get: 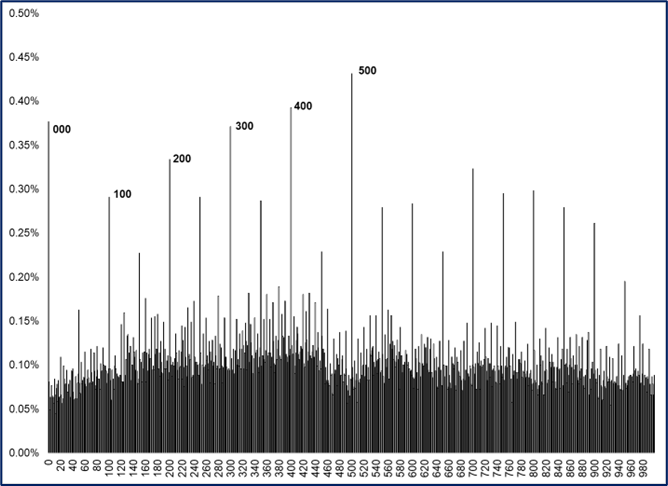 Interesting that the 500s (for example, say, $12,500, or $67,500) are more frequent than the round thousands in bitcoin. I don’t know why that would be. It also seems that more highs and lows fall on the left side of 500 than on the right side. Again, that’s weird, and I’m not sure why that would be the case. If you have any theories, please share. 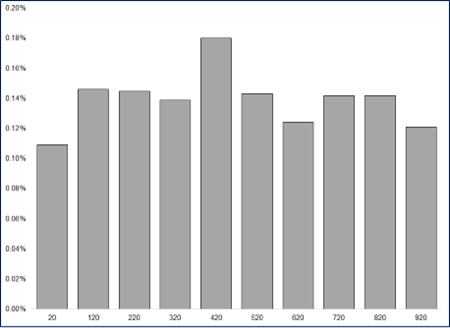 There is a modest 420 bias but it’s not big enough to matter.

The takeaways are simple once you know where the uneven parts of the distribution lie. If you leave an order to buy bitcoin at, say $47,301, you are statistically more likely to get filled than the person with an order at $47,300 or $47,299 because the majority of buy orders will be on the round number at $47,300. Most days, you’ll probably get filled at any one of those three levels, but the occasional time you get filled at 01 when you would not have got filled on or below the round number can have a big impact on your performance. It can be the difference between a red or a green P&L day.

On the flip side, if you are leaving stop loss orders, always leave them on the correct side of the round or meme number. Sell stops should be below 00 and buy stops should be above. Anyone leaving a bitcoin sell order at $69,501 this week probably doesn’t know what they are doing. On the other hand, the ones that sold at $68.998 are probably expert traders that understand markets, memes, and crowd psychology.

Be smart? Or make money?

Humorless NGMI TradFi dinosaurs would scoff at the idea that analysis of a multi-trillion-dollar asset class requires us to recognize a thick band of resistance from $69,000 to $69,420 because of the converging meme numbers there. But if you want to make money in crypto, leave your EMH textbooks at home. Do whatever works. Embrace the nonsense.

A new asset class with novel quirks and qualities comes along only once or twice a lifetime. I think you can use a combination of TradFi-style macro analysis and a working knowledge of the dominant behavioral patterns, memes, and cultural narratives surrounding crypto to build a framework for understanding what the heck is going on.

[1] Long-time readers know I am weirdly fascinated by this topic. When I die, I’ll be remembered as either the “Turnaround Tuesday” guy or the “Round Number Bias” guy. Or Brent.