The Stadium Curse + 7 other warning signs

A feature of bull markets and booming industries is: at, or near peak levels of optimism, you start to see the names of companies from that industry on stadiums. The 2000 dotcom mania provides many examples including Enron Field, CMGI Field, the MCI Center, the Corel Center, and PSINet Stadium (PSI was an early internet provider). Those are all companies that boomed in the internet bubble and went bankrupt (or almost bankrupt) afterwards. Needless to say, those stadiums all have different names now.

Not every company that puts its name on a stadium goes bust, of course, but it’s a signpost marking possible hubris and excessive cash on hand. They even have a name for it: The Stadium Curse. Much like the Skyscraper Index, stadium naming is a potential overconfidence indicator.

FTX put its name on the Miami Heat arena in April, and now Crypto.com is the new name of the LA Lakers’ arena. A few weeks ago, Coinbase inked a big deal with the NBA. Hmmm. BUT! Stadium naming rights are a super big picture warning sign, not a timing device.

There are however, seven other warning signs for crypto:

1. A flood of people are now leaving TradFi jobs to go to crypto companies. This is my subjective take based on anecdotal evidence. The trickle of TradFi experts leaving for crypto has turned to an absolute, raging flood. It’s not one or two visionaries, it’s a mass exodus now. This is probably bullish crypto long-term but bearish short-term. Many of these people are my friends and they will be fine, but this is peak bull market stuff, short-term and it happened in 2017, too. Textbook overbuild, overhype part of the cycle.

2. Arthur Hayes sounds less bullish. Hayes is an amazing writer and holds near-deity status in the eyes of his followers. He is highly respected. Here is an excerpt from his latest:

If the S&P 500 meltup halts and the index rediscovers gravity, that means the tapering of bond purchases is negatively impacting risky asset markets. That is a sign that a nasty correction in all risk assets might commence. The only thing that does well in that environment is long USD, as all manner of individuals and institutions sell risky assets to raise dollars to repay debt. That doesn’t necessarily mean crypto will be negatively impacted, but it would be a sign to tread carefully.

And so, as we close 2021, I remain cautiously bullish that the substrate of central bank money printing will continue to foster sick gainz for all manner of crypto assets.

Yes, he’s still bullish, but it’s cautious and conditional now vs. adamant before.

3. Fugly charts. Bitcoin tried to take out the ATH twice and failed. ETH took out the all-time high and failed. 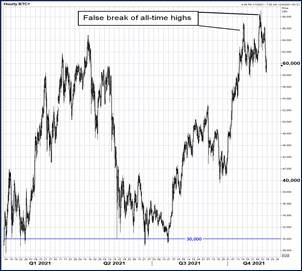 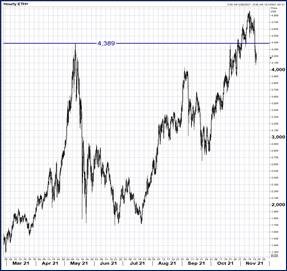 Meanwhile, Microstrategy, which I believe is the number one listed bitcoin proxy, failed again at the key $880 level. You can see in the next chart, there was the huge island short squeeze built on the $880 level and now two subsequent tests and failures. Bearish. To read my full AM/FX write-up on bitcoin proxies, click here.

Microstrategy $880 area has been (literally) pivotal 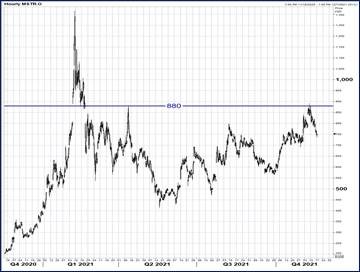 4. Gaming tokens trade very poorly given the amount of attention they have received recently. So much hype and pumping, and yet ATLAS and AXS both around unchanged over the past two weeks. Attention is supposed to mean number goes up. If number doesn’t go up, that’s another warning sign.

5. USD rally, falling US front end. BTC is still a risky asset with a primary narrative predicated on USD debasement and Fed largesse. If Brainard is nominated, I think risky assets will sell off (see today’s AM/FX for why) and regulatory risk goes up. If Powell is renominated, Fed hikes get more priced. Either way, not awesome for crypto.

6. Defi FUD could have some implications short term as potential crackdowns and shutdowns make people nervous about where their wealth is sitting. This Doomberg article on a potential SEC crackdown is good (though with a chosen name of Doomberg you can infer there is going to be significant bias in anything they publish). It’s an excellent publication overall and the DeFi piece is nicely written.

Q: Brent, you seem to be bearish a lot lately. Are you always bearish?

A: No, I am bullish on crypto as an asset class and I’m agnostic on price. Here’s a bullish piece I wrote. Lately, I have been more in favor of selling the spikes because the hype machine and anecdotal stuff (as described above) is worrisome.