MTC #5: Nobody Will Ever Tell You When To Sell

Nobody’s Gonna Tell You When To Sell

I think this is a problem in crypto right now. It feels rude right now to even utter something bearish about crypto because so many people have become so intellectually committed to the space. There are, of course, always going to be the permabears and haters who think bitcoin is going to zero, but I feel there should be more agnostics focusing on the fact we are in a bad part of the cycle for crypto here and the corrections could be epic.

Sure, if you’re a maximalist with a 10-year time horizon, cycles don’t matter but if you want to sidestep another crypto winter, you could do worse than lightening up your risk as the halving cycle and the monetary policy cycles turn bearish.

Every 1200 days or so, the reward for mining bitcoin transactions is cut in half. Each halving has been followed by an epic bull run, then a super cold period, then another bull run in anticipation of the next halving cycle. See: 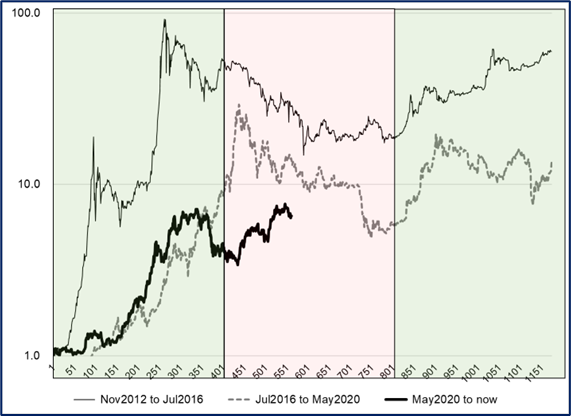 The BTC and crypto hype machine is 10X more powerful than the 1999/2000 internet hype machine. Nobody is ever going to tell you when to sell. It is borderline verboten for anyone in crypto to even utter a bearish word. Keep that in the back of your mind. Every story you ever hear is going to be bullish. It’s cool to HODL but just make sure you can survive the next winter.

Also note in that chart that each bull run is less impressive as the market cap rises and it becomes impossible for the next wave to outgrow the last. This is why the Plan B model becomes less and less accurate. The halvings are mathematically less important (lower overall impact) and the law of large numbers kicks in. It’s easier to grow from 1 billion to 1 trillion than it is to grow from 1 trillion to 1 quadrillion. Obviously.

One of the big reasons Paul Tudor Jones and many others were screaming from the rooftops about bitcoin in mid-2020 was because the US just embarked on the greatest monetary policy experiment in modern history. The experiment is either over, or its on a prolonged pause. The dollar debasement story is dead as the USD rips higher, the Fed accelerates taper and global central banks stop printing. I have no doubt that the next round of money printing will be more ludicrous than the last and that will probably take crypto to new all-time highs at some point in 2023 or whatever… But for now, one of the biggest inputs into the bull crypto thesis is on hold.

And all those new TradFi types that have just bet their careers on crypto will not be able to ignore the turn in the Fed cycle as easily as non-macro crypto maxis.

The easiest way for me to show the Fed cycle is to show EM currency performance because when the Fed turns hawkish, the USD rallies most and most quickly against emerging markets. Here is the YoY performance of bitcoin vs. EM currencies: 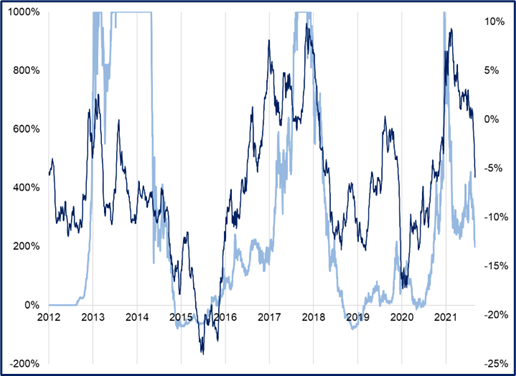 Left y-axis is bitcoin, I capped it at 1000% so the chart remains legible

Obviously, I could be wrong. The nu variant could lead to another massive round of money printing, for example. More likely, we are at a short-term high and some sort of winter is coming for crypto. I doubt it’s bad as the last winter, but it could be.

Thanks for reading. You can sign up for crypto updates (free) and my macro daily ($490/year) here.