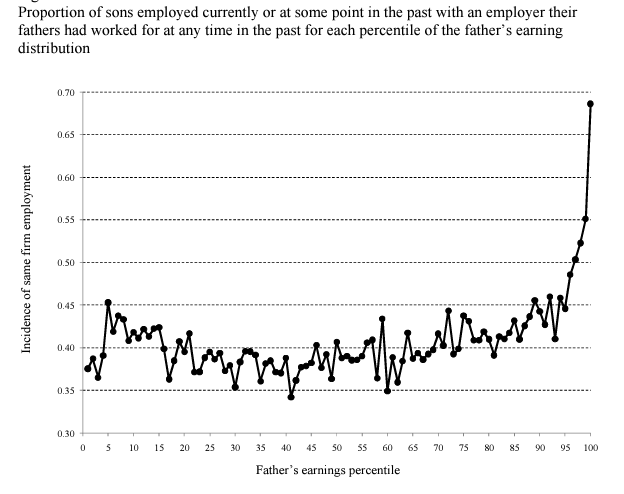 with an employer their father

had worked for at any time vs.

If you think of the market as a big information discounting machine, you can see that in action right now. There is a strange combination of weak consumer, weak housing, and weak business sentiment coupled with a strong labor market, high and falling inflation, and hope for a rebirth of China growth. Each data point triggers a Bayesian recalibration of prior assumptions of the probability of the five main outcomes:

We entered 2023 with probabilities leaning something like 5/10/40/30/15 and we got up to a more optimistic spread of maybe: 10/25/40/20/5 late last week. Now, we are back to something more like 5/15/40/30/10 after a string of bad hard data in the US, and elsewhere. I have been skeptical of soft data because in a nominal world with high inflation, sentiment is bad (inflation feels bad) but hard data might outperform on a nominal basis (inflation boosts nominal data, even though it feels bad). I am becoming less optimistic and will continue to update my odds of the five outcomes.

Now, we are starting to see bad hard data, especially global retail sales, but also US Industrial Production. Wednesday, I showed a chart of NZ retail sales printing their worst December in 20 years. UK Retail Sales came out last night for December and they were bad.

6-month rolling sum of MoM Retail Sales in the UK 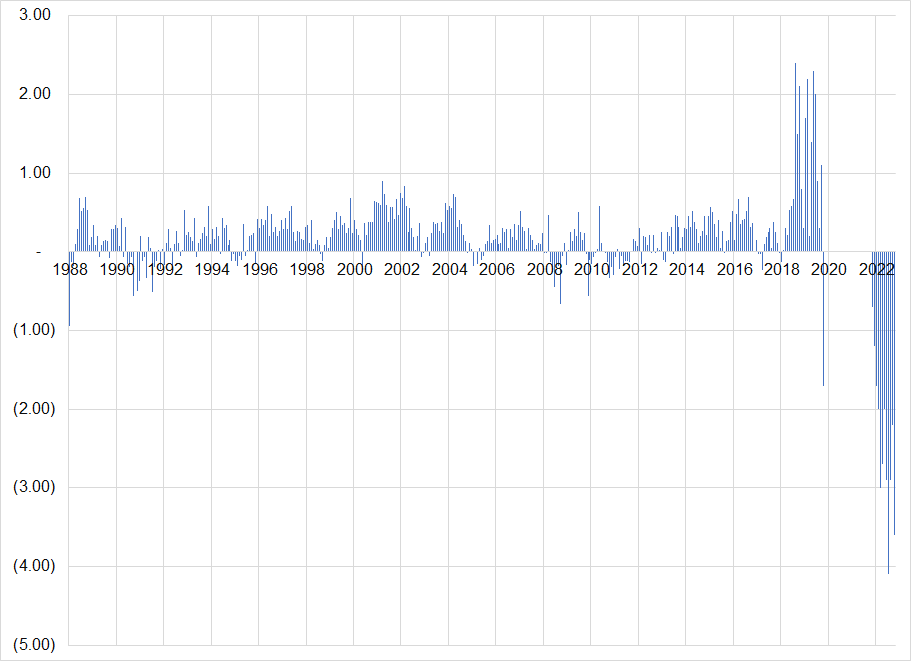 The thing is, until the labor markets turn, perhaps none of this matters. We are stuck in the tense purgatory between soft landing and crash landing until one of these series resolves one way or the other. A weak consumer who loses their job is a disaster for the economy. A weak consumer with a job can skate through and come out the other side somewhat unscathed.

Given this complex set of crosswinds, I will be happy to change my view without much hesitation as new data comes in. Right now, I’m less bullish than I was over the first 2.5 weeks of 2023 because the market repriced to higher soft landing odds just as we got a string of bad hard data. More optimistic pricing + bad data = less bullish.

Speevr did a nice write up on their six scenarios for the US economy here. I tend to always think of the future probabilistically, but I am also pretty sure the shape of my thinking in today’s piece is subconsciously inspired by that Speevr piece. Give it a read if you’d like a more mathematical look at US economic scenario probabilities.

Adding to this constant back and forth repricing in markets is the push and pull between central banks attempting to maintain their inflation-fighting credentials and markets saying: “We don’t believe you.” The Fed and ECB are attempting to raise the market into a large pot, and the market has called. Now, the central banks can either raise again, check and wait for more data, or (eventually) fold.

“Our message to Canadians is that interest rates are very low and they’re going to be there for a long time,”

And rates begin to skyrocket a few months later… Or Powell promises 75bp hikes are not being actively considered in May and then the Fed rips rates 75bps at the next three meetings in June, July and September… How much credibility should we place on Lagarde’s recent insistence that they are going to stick with the plan?

They are just extrapolating current conditions onto future policy. It’s destructive and pointless. The market’s mantra is “listen to the data, not the central banks” and while we do see some kneejerk responses to headlines like the Lagarde one, in the end the Fed has all but promised to stay on hold for most of 2023 and yet the market is pricing cuts galore as you can see in the chart below. 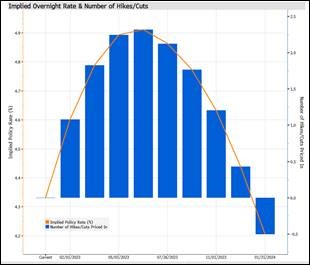 Still, when the Fed bails on its “tighter for longer guidance,” it will still matter because that capitulation moment will drive yields down another giant leg lower. In that context, we don’t need to listen to policymakers’ promises because they are credible, we need to watch for when they abandon those promises as those points are the key inflection points for markets. Much as when the Fed abandoned “transitory” in November 2021, kicking off the worst year for 60/40 in decades… When they abandon the “we ain’t gonna cut” language… It will be a watershed moment. Until then, each new data point needs to be treated with respect as we continue to evaluate the correct odds of the five main outcomes.

I am not an equity analyst, but these TSLA price cuts seem like they should be really bad for Ford. There has been a positive halo around Ford and its EV effort, but margins are tight and a major competitor slashing prices when margins are already tight, and $7500 EV credits are limited seems: bad. Have a lucky day.

“Luck is not something you can mention in the presence of self-made men.”