am/FX: Oops, I Did It Again

Enron got to enjoy its new

stadium for at least two years or so,

Oops, I did it again

A feature of Bubblicious bull markets and booming business cycles is that at, or near peak levels of optimism, you start to see the names of companies from that industry show up on stadiums.

The Year 2000 dotcom mania provides many examples including Enron Field, CMGI Field, the MCI Center, the Corel Center, and PSINet Stadium (PSI was an early internet provider). Those are all companies that boomed in the internet bubble and went bankrupt (or almost bankrupt) afterwards. Needless to say, those stadiums all have different names now. 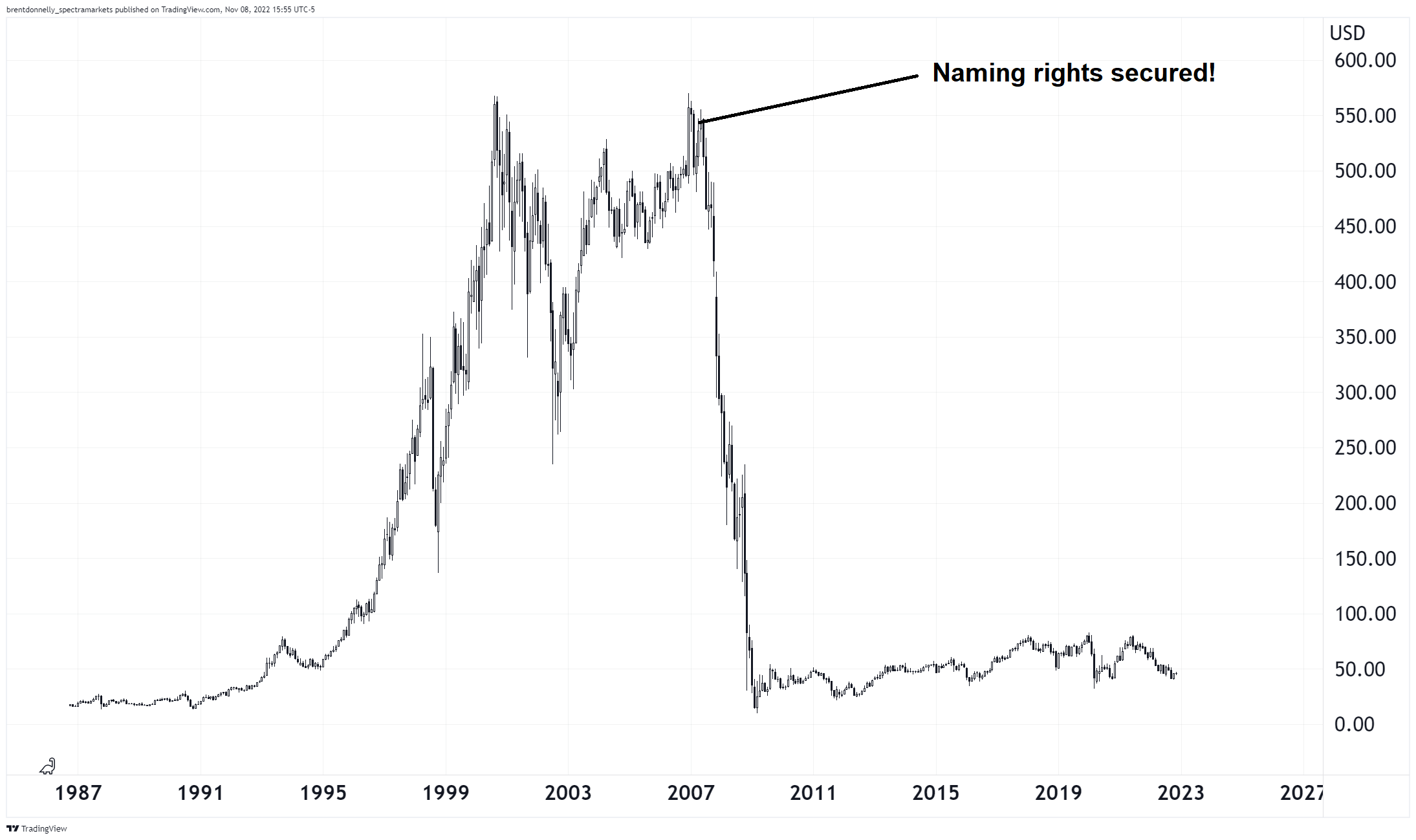 Not every company that puts its name on a stadium goes bust, of course, but it’s a signpost marking possible hubris and excessive cash on hand. They even have a name for it: The Stadium Curse. Much like the Skyscraper Index, stadium naming is a potential overconfidence indicator. Here’s how CoinDesk put it when Crypto.com bought the naming rights to the LA Lakers arena at the peak of the crypto/Web3 bubble in November 2021:

These cases illustrate the fundamental tension at the heart of naming deals. They’re the corporate equivalent of buying a Lamborghini: functionally almost useless, but a huge signal to the world that you’re winning, exactly because you’ve got so much money to set on fire. Much in the way that day-trading gurus flaunt (rented) Lambos, this makes the success signal of a stadium name particularly attractive for companies that haven’t actually “made it” yet.

None of this is hindsight. There are articles about the stadium curse going way, way back. So, when FTX put its name on the Miami Heat’s arena in April 2021, and Crypto.com slapped its moniker on the LA Lakers’ arena that same November, there was a mix of laughter, head shaking, consternation, and outright alarm. A cursory knowledge of financial history tells you that companies that put their names on stadiums are doing the corporate equivalent of the newly flush, kite-high, shirtless bro making it rain in the Vegas club with fresh stacks of Benjamins.

While not many are surprised that crypto.com did this… 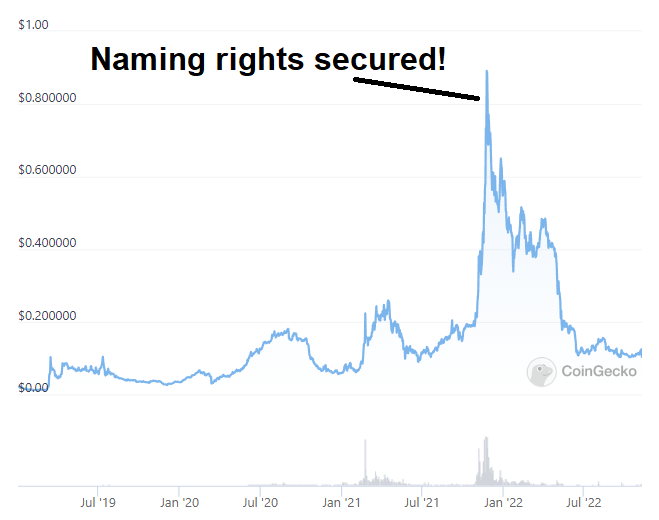 The big surprise is that the company thought by many to be the gold standard of crypto collapsed, pretty much overnight. Like this… 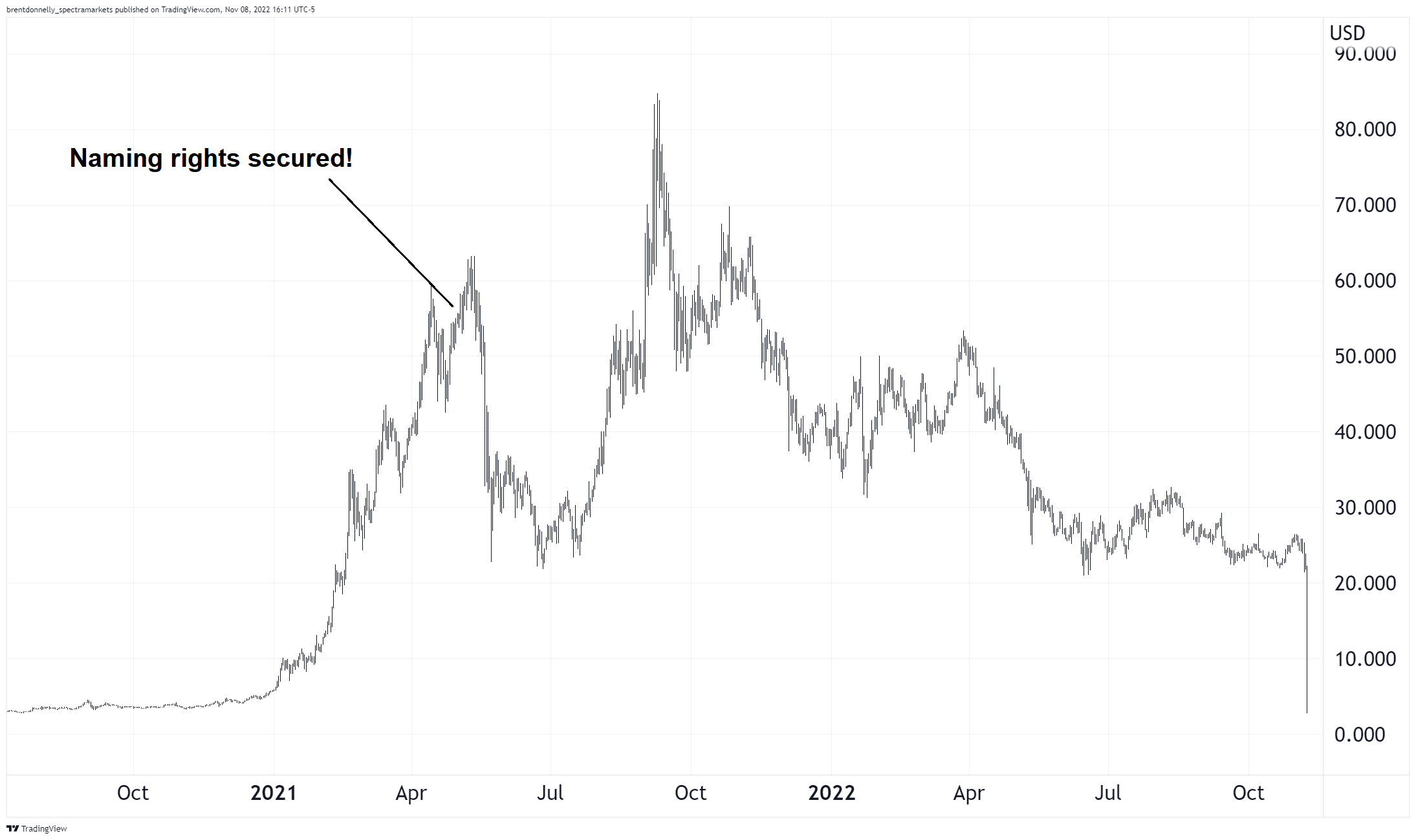 Lags are long and variable, but the Stadium Curse is a big, bright red flag waving over potential poor governance and/or out of control spending at an overconfident corporation. Again, this is not hindsight and it’s not cherry-picking.

1.      Victor Niederhoffer analyzed the performance of companies buying naming rights from 1990 to 2001, in his book Practical Speculation. These companies trailed the S&P 500 by a median of -8% in the year they named a stadium and a median of -27% three years later.

2.      The conclusions from this 2021 research on the Stadium Curse were that stadium namers consistently underperform for years. It included this accurate forward-looking statement:

“If I personally held any Crypto.com stock in the private market, I’d dump it.”

“When firms announce that they have purchased the naming rights to a sports facility, they routinely describe the purchase as a savvy investment. The firms that buy naming rights believe that the rights provide greater visibility, which leads to higher profits. This sentiment has generally been echoed in the marketing literature. In contrast, our main finding is that naming rights offer no economic value.”

Whoever works for these CEOs should have been telling them: “Please let’s not do this.”

Super Bowl ads are another way to burn cash 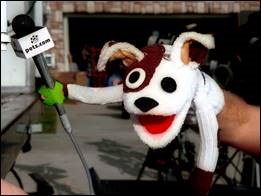 While not as clearly egregious as stadium naming, advertising in the Super Bowl is another bull market euphoria signal of overconfident young companies burning way too much cash.

In 2022 we got ads from these guys (I presume you have an idea of how their stocks have fared since):

This is a bit more like cherry-picking because plenty of established brands also advertise during the Super Bowl without seeing their stock price collapse soon after. But when hot new companies are burning seven million dollars for 30 seconds of airtime like it’s nothing, that’s a thing that makes you go hmmm.

The lessons of 2001 were not learned in 2021. Maybe in 2041, they will know. But probably not. Keep today’s am/FX bookmarked for when the next generation of tech darlings makes all the same mistakes during the Great Mars Colonization Bubble of 2041.

And a fresh red flag for 2021 was when a company used meme numbers.

Takeaways from the FTX collapse: 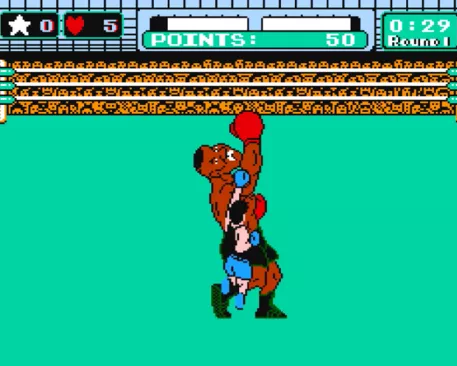 Betting odds now show the Democrats at 82.6% likely to win the Senate. This is a surprise but I’m not sure it matters much for markets. 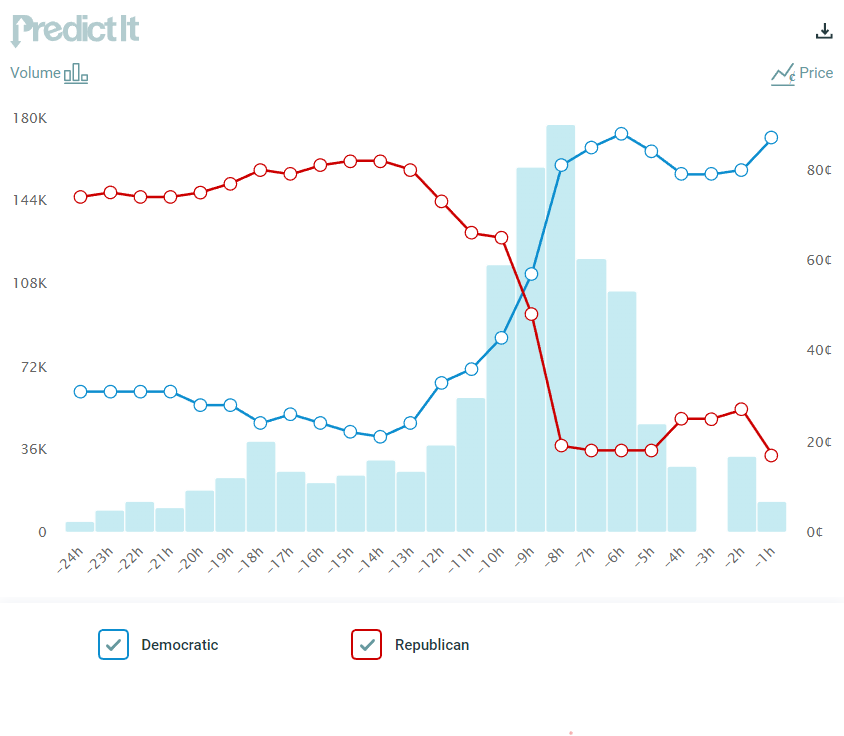 Also interesting (still not relevant to markets, just interesting) is the race for President in 2024. DeSantis now a small favorite over Donald Trump and Biden’s odds improve as Dems outperform expectations last night.

Who will be elected US President in 2024? (via PredictIt) – odds since August 11 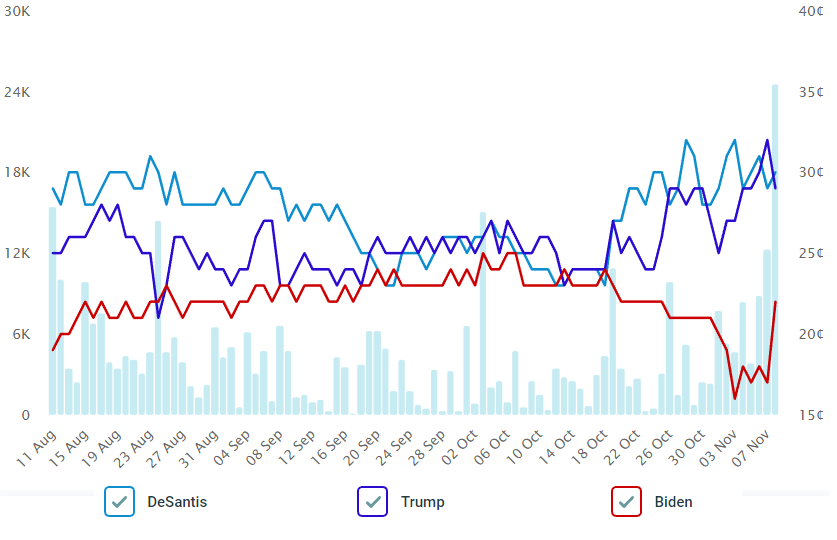 CPI is hard to trade. Last month, we had the huge drop and reverse in spooz on a strong number. But that setup was completely different. Going into that CPI figure, stocks were on the lows of the year and the dollar was at multi-year highs. This time, the market has been aggressively selling dollars into the number and fixed income volatility has been dropping despite a higher terminal rate. Therefore, I would expect an orthodox, symmetrical reaction to the figure. Last month (am/FX: Runup and USD down), I presented this chart ahead of CPI:

AUDUSD %return: 3 days before CPI, the day of CPI and 3 days after CPI 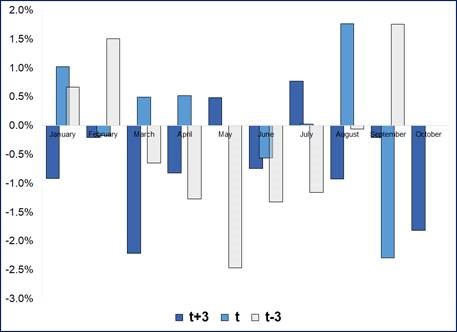 The takeaway then was the same as it is now: The runup into the number matters just as much as the release itself. Ignore the gray bars and focus on the dark and light blue. The dark blue bars show the change in AUDUSD in the three days leading up to CPI. The light blue bars are what happens on the day of CPI.

Notice that the light blue bar is almost always the opposite of the dark blue bar. This was the case again last month as AUDUSD sold off into CPI Day and skyrocketed after briefly dipping. I can’t update the chart yet because today is not in the books, but we are currently up 3% in AUDUSD in the past three days. That would be a big dark blue bar off the top of that chart.

This figure leaves out whether the CPI was strong or weak in each month because it doesn’t matter. CPI was strong last month, and AUDUSD went up. The starting conditions (momentum and positioning going in) are more important than the actual release. So why not go in short AUDUSD? Because the market is particularly amped up to be short USD right now and I think if the number is weak, they will take another big shot. Also, we have entered the zone where CTAs have become very active selling USD because some trend change signals are triggering, so that could also be fuel for follow through dollar selling on a weak number.

To be clear: Normally the runup is all that matters and in this case that would mean long USD into CPI. However, as CTAs are getting sell USD signals, USD charts are breaking down (see USDSEK for example) and the market is eager to add to recent USD shorts, I don’t see an asymmetry tomorrow. Trade whatever the number says.

I am out of the office tomorrow (Thursday) and will return Friday. No am/FX tomorrow. Good luck with CPI.

Have a stadium-sized day. 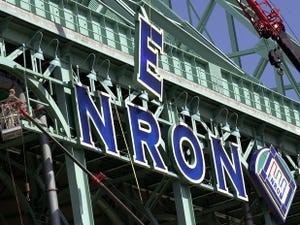 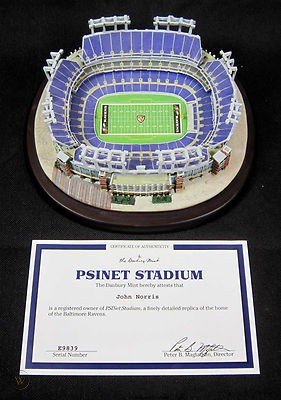 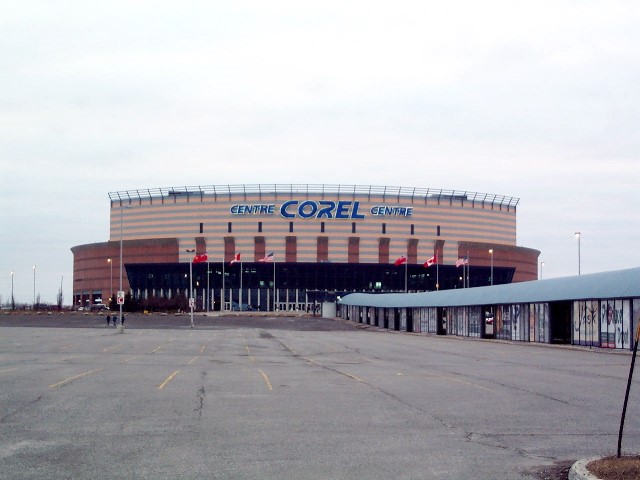 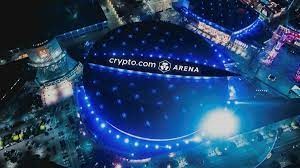 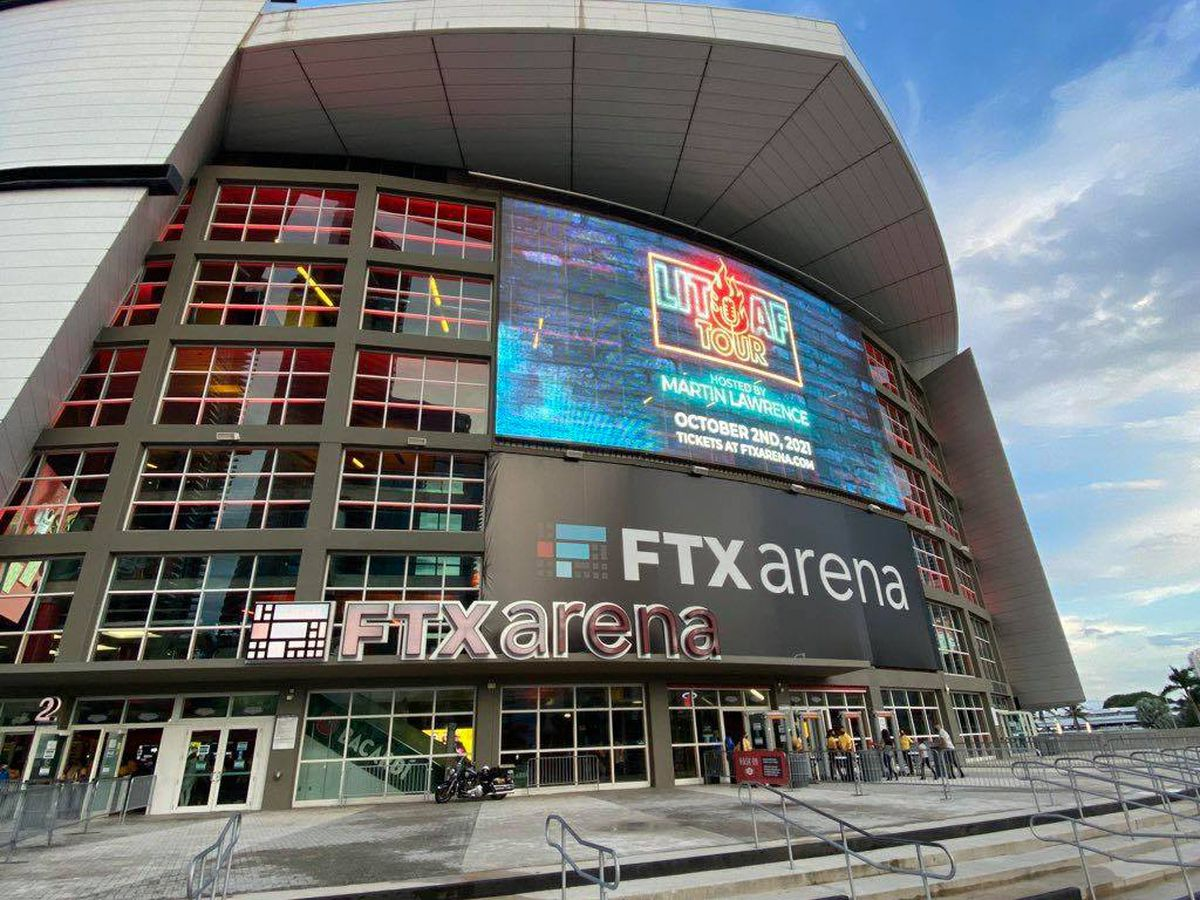