When I was a kid, we had a family friend (a married couple) who were successful entrepreneurs. At the age of 40, they sold their business and the associated real estate for a chunky profit and retired. We used to hear amazing stories about their trips to the casino and how they were always getting so lucky there all the time. One time, they won a brand new black Audi on a slot machine Super Jackpot. This was an incomprehensibly large prize in the eyes of this 17-year-old kid who drove his dad’s Mercury Topaz and only when he could borrow the keys. Audis were few and far between in Ottawa in the late 1980s and winning one was seemed like an incredible stroke of luck.

“How are they so lucky all the time!” we all asked.

Then, about a year after they won the car, we heard a remarkably different story. They had put themselves on the Casino Self-Exclusion List for problem gamblers because they couldn’t stop going to the casino.

We only heard about the winners, not the losers.

Remember this when you read amazing wins like the SHIB billionaire or the DogeCoin millionaire:

The NYT dogecoin millionaire article I linked above appeared May 14, 2021. Here’s the chart of doge at that time. 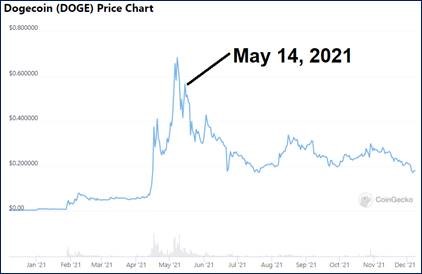 I have my very own example of a fawning media story … about me. And guess what… It was the top, too! 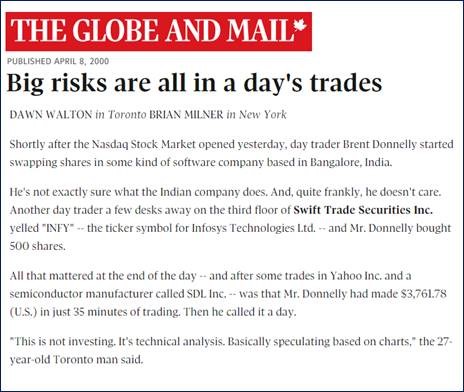 Full story here if you want a laugh. That article marked the top in the NASDAQ before an 82% drop, plus: it led to me getting audited by Revenue Canada! Hubris is a killer. Here’s the NASDAQ with the date of the article marked: 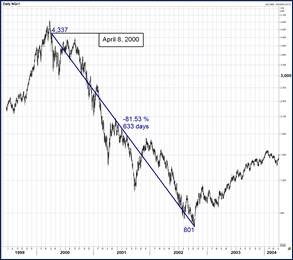 Anyway, the history of crypto is littered with coins that rose to prominence and then quickly disappeared from memory. Whether privacy coins, or TheDAO in 2016, or Litecoin, Peercoin, Monero, MaidSafeCoin, NEM, Quark or BBQCoin… There have been plenty of short-term appearances in the Top 15 Cryptocurrencies by Market Cap.

Here is a comprehensive visual:

The top 15 cryptocurrencies, by market cap 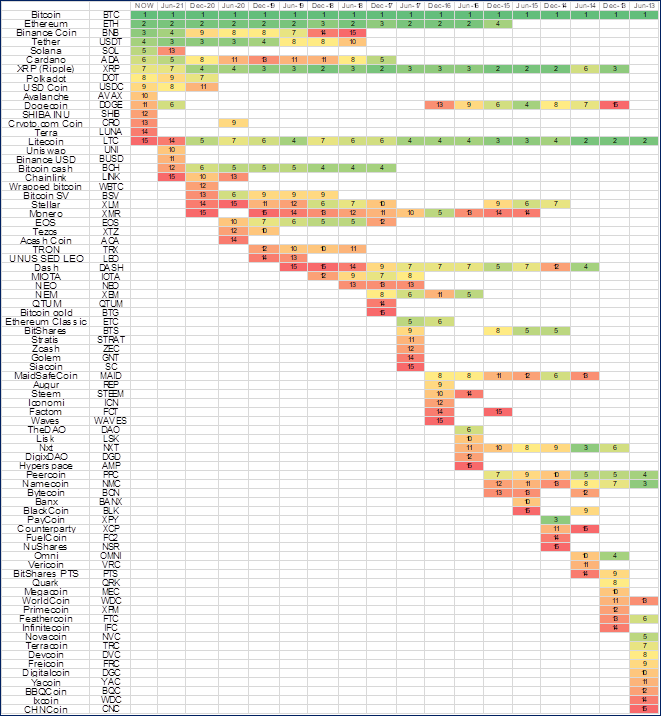 This is a video that shows the evolution of the Top 15. It’s kind of boring, but also mesmerizing.

Much like I believe CryptoPunks will retain their value even if or when 99% of all other NFTs go to zero… bitcoin should persistently dominate the altcoins as they cycle in and out of relevance. BTC’s use case as a digital alternative to gold and its OG status with the Satoshi backstory and actual decentralization means BTC is always the number one; I doubt the flippening ever happens. ETH has been mostly steady at #2 in recent years, though it was surpassed twice by Ripple, once in 2017 and once in 2018. It has competition. Bitcoin does not.

Altcoins are mostly hype cycle assets that don’t persistently maintain their rank. Litecoin and EOS are good examples of this. They were darlings in the 2018 run but have come off significantly as new sweethearts like AVAX and SOL take over. Before getting married to SOL, or AVAX, or AXS or whatever, just remember history shows that these are almost all fleeting stories, not sustained moves. This chart is typical of the hills and valleys altcoins travel: 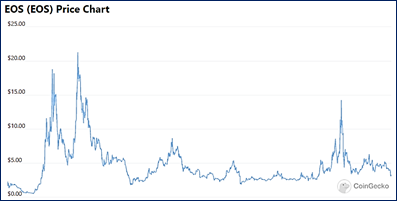 Stocks cycle in and out of the top 15 too, of course. The oil companies that ranked highly in 2014 are no longer on the Top of the S&P list. But those stocks are down 20%, not 99%. Altcoins are more like a Trump SPAC or SIGL or LTEA. Get onboard, ride the wave, and get off. BTC is for HODLing; altcoins are not. Next time you have FOMO when you hear about the guy that got SOL at $2 and sold it at $200… Remember that for every crazy huge winner, there are literally hundreds of altcoins whose charts look like the EOS chart, or worse. When you read a ridiculous WSJ article about a dogecoin millionaire, that is what we call “survivor bias”.

You only hear about the winners, not the losers.

A fun exercise is to type random letters or words into the search bar on CoinGecko and take a look at some of the max timeframe charts. For every Shibu Inu moonshot, there are thirty charts that look like this: 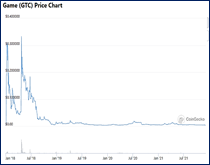 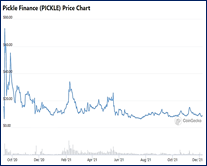 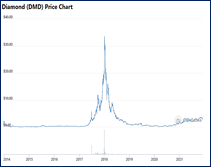 I searched “game”, “pickle” and “diamond” (three random words) and got these sh*tcoin charts

Most altcoin charts look like that. It’s easy to forget that the bad coins have amazing hype, narrative, and origin stories too. Every coin has a marketing department, religious adherents, and a cool story. But very few remain relevant once the primary hype cycle wanes.

Peercoin was the first proof-of-work token and one of the earliest pioneers on the blockchain… It was a great story! 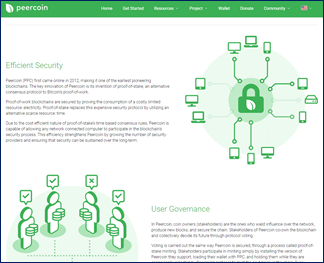 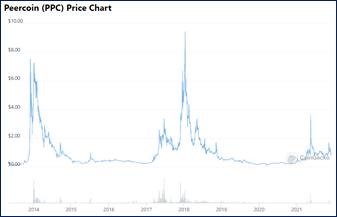 The next table shows the percentage of the top 15 crypto currencies that were still on the list in future years (leaving out bitcoin, since it’s always number one). You can see that turnover is lower now than it was, but turnover remains extremely high. Half the top 15 from June 2020 is not in the top 15 now. ChainLink, EOS and others were hot a year ago and have been replaced by a new crew of favorites. This doesn’t mean that every altcoin is a sh*tcoin, by the way. It just means that probabilistically, your current favorite is around 50/50 to be in the Top 15 a year from now. You get rich riding the altcoins from $1 to $200, not riding them from $200 to $40,000. 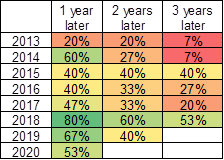 I’ll check back in June 2022 and every six months after that to see which of the current stable of favorites remains in the Top 15. The most recent top 15 entrants are Solana, USDC, Doge (back for another round lol), AVAX, SHIB, CRO and LUNA. Crypto.com coin and SHIB seem like layups to fall back out of the top 15.

AXS never quite made the top 15 and I think it has made its final ATH before heading towards zero. The game isn’t all that fun and P2E rates below minimum wage mean the network will start fizzling pretty quick. I have played a lot of card-based battle games and the most fun part of those games is deck building and adjusting for the various metas. When each card is >$500, there isn’t much of a meta. And if card prices plummet, the meta might improve, but the P2E crowd will disappear and bagholders will be sad. That’s it for today. Thanks for reading.

When a good game company announces they are tokenizing an existing, fun game… Get long that company! I know there are many risks and challenges to this approach for incumbents. The UbiSoft blowback today shows it will not be free money for them.

Need a smaller company to do it, or a large company to spin off one well-known game into a new offshore company and then tokenize that game. Until then GameFi is the new VR: overpromising and underdelivering. 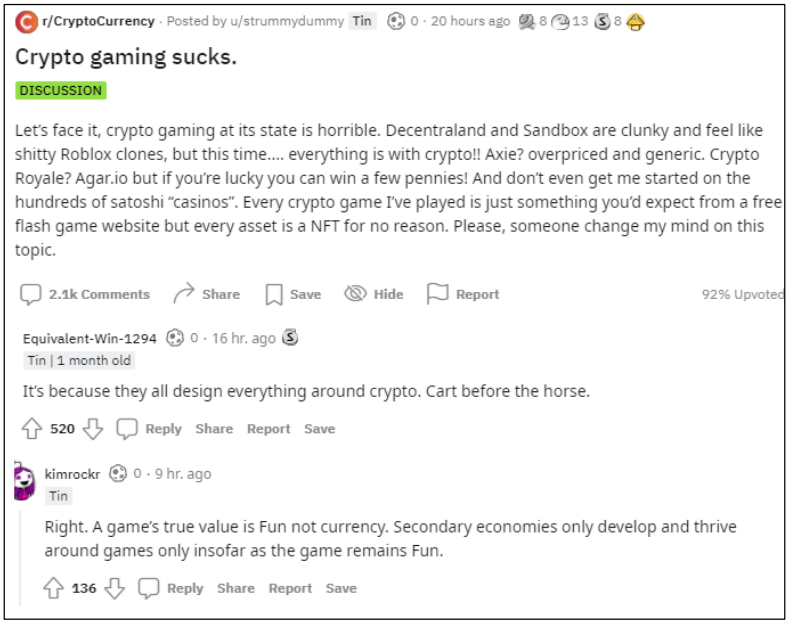